For those who aren’t from Portland or don’t really know anything about Portland, this city is somewhat obsessed with food carts.  Now I used to be terrified of going to food carts.  I was convinced (based off no facts) that food carts were basically going to be like carnival food – not good for you, mediocre taste and likely to give you E. coli.  The first food cart that I wasn’t afraid to check out was Addy’s Sandwich Bar. 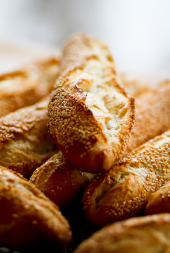 Sandwiches? That didn’t sound so dangerous or scary!  Turns out, Addy’s was amazing!  Thick sliced turkey, brie, creme fraiche and cucumber slices served on a perfect mini baguette.  Oh, the things I had missed from avoiding food carts!

One of the things that makes Addy’s sandwiches so perfect is the bread they use – freshly baked baguettes from little t american bakers. Opened by Tim Healea, the former head baker at Pearl Bakery, you can be assured they have gotten this part right.

little t’s bread is served at several restaurants throughout town but they also have a retail space in SE Portland. I have had little t on my list of bakeries to visit for a really long time but for some reason I just never made it over. Finally this past Saturday I went and it was most definitely worth the trek across the river.

little t’s space is a large, industrial-looking space inside a new condo building with huge floor-to-ceiling windows, concrete walls and modern decorating of metal chairs and wood tables.  It wasn’t necessarily what I was expecting and it isn’t particularly “homey” like other bakeries out there, but it still feels welcoming.  little t is a fun, relaxed place to grab a delicious treat, bring a book or a friend and hang out for a while.

What was as expected – everything in their pastry case looked amazing.  So many fun choices to choose from: croissant bread pudding, fruit tarts, shortbread ganache cookie sandwiches, and even a beautiful passionfruit cake.  Their sandwich menu has lots of tasty options, all of which are made to order.  Plus on Sundays, they serve brunch all day with treats like homemade granola and bacon, egg and cheese on a freshly baked croissant.

So no matter what time you go or what you’re craving, you’ll find something delicious!