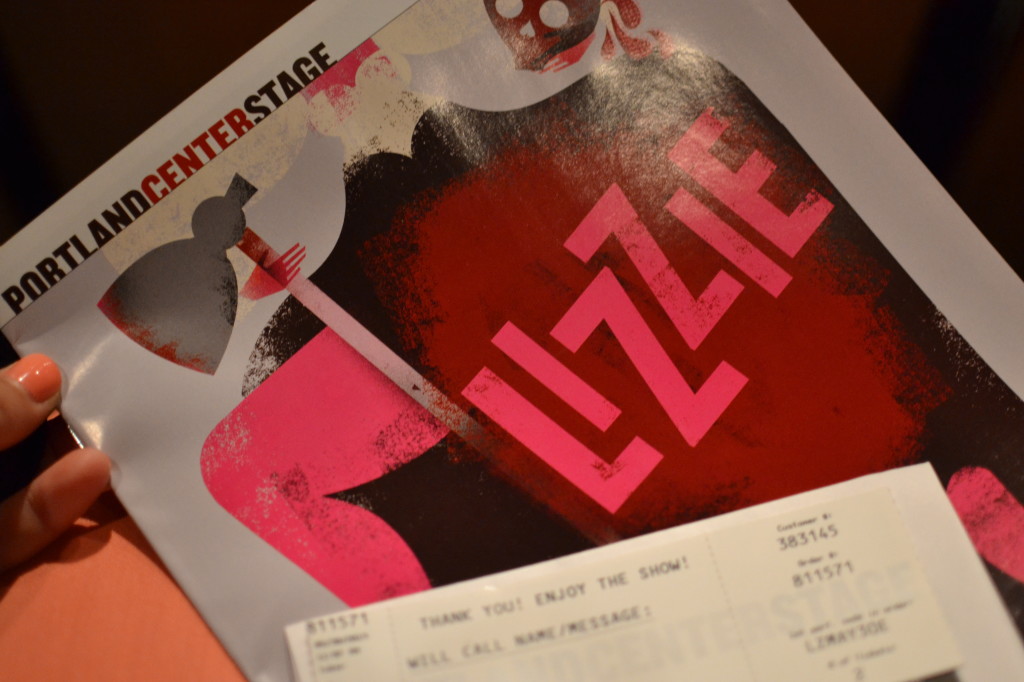 I am a big time fan of musicals. It is not uncommon to see me rocking out to showtunes while at work – two of my favorite Pandora stations are Avenue Q and Little Mermaid. Yes, I am that person, almost 30 and listening to Disney music with pride. During my freshman and sophomore years of college, I lived in northern New Jersey and since my school was only a 45 minute train ride to NYC, I spent nearly every weekend in the city. I took it upon myself to see as many shows on Broadway as possible. I was lucky enough to see Wicked with Idina Menzel and Kristin Chenoweth just a few weeks after opening. I absolutely loved it and consequently have seen it about 4 times.

So I guess it was no surprise that I was really excited when I was offered tickets to the new musical, LIZZIE at Portland Center Stage last weekend. I brought my “culture buddy” Alyssa, who goes to all the Broadway Across America shows with me. As per usual, she gave me a brief synopsis of the play on our way over to the Gerding Theater. 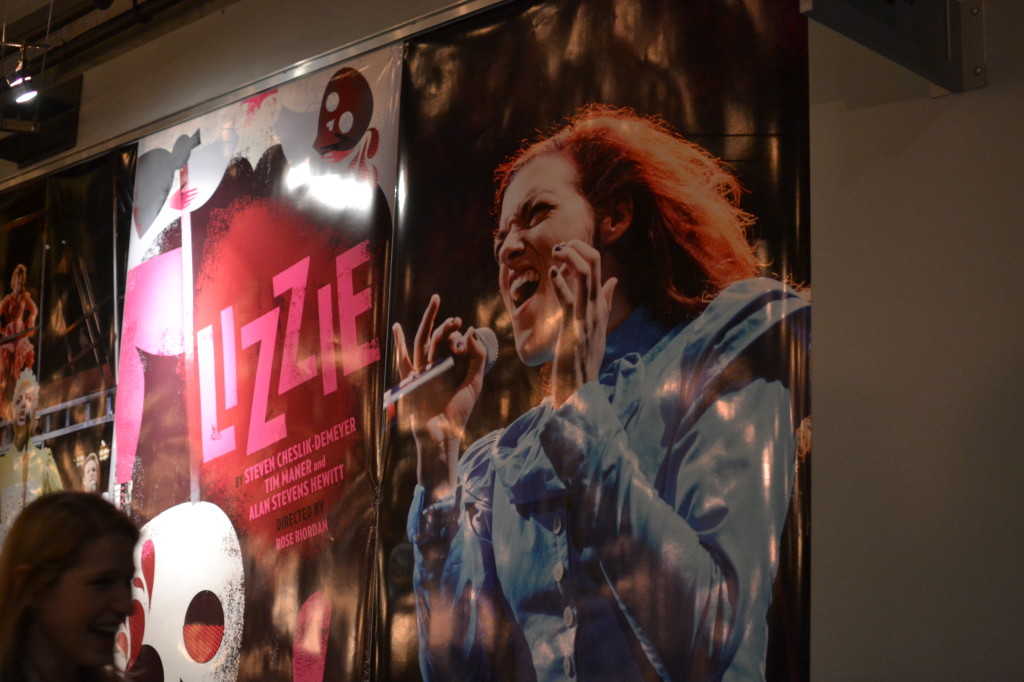 Back in 1892, Lizzie Borden was convicted of killing her father and stepmother back in 1892. You may know of her from the jump rope rhyme,

When she saw what she had done,

she gave her father forty-one”

(Why do parents let their kids sing this song?!). Despite history making it seem like she was assuredly guilty, with no witnesses, she was actually acquitted and the murders remain unsolved.

With such a dark storyline, I wasn’t really sure what to expect. I certainly wasn’t expecting a really fun performance with only four women in the cast and a complete rock band instead of an orchestra. The Victorian-era rock show somehow really worked though. “The energy and angst of rock music was the perfect match for a story about a gruesome ax murder,” the show’s director, Rose Riordan, wrote in the playbill. 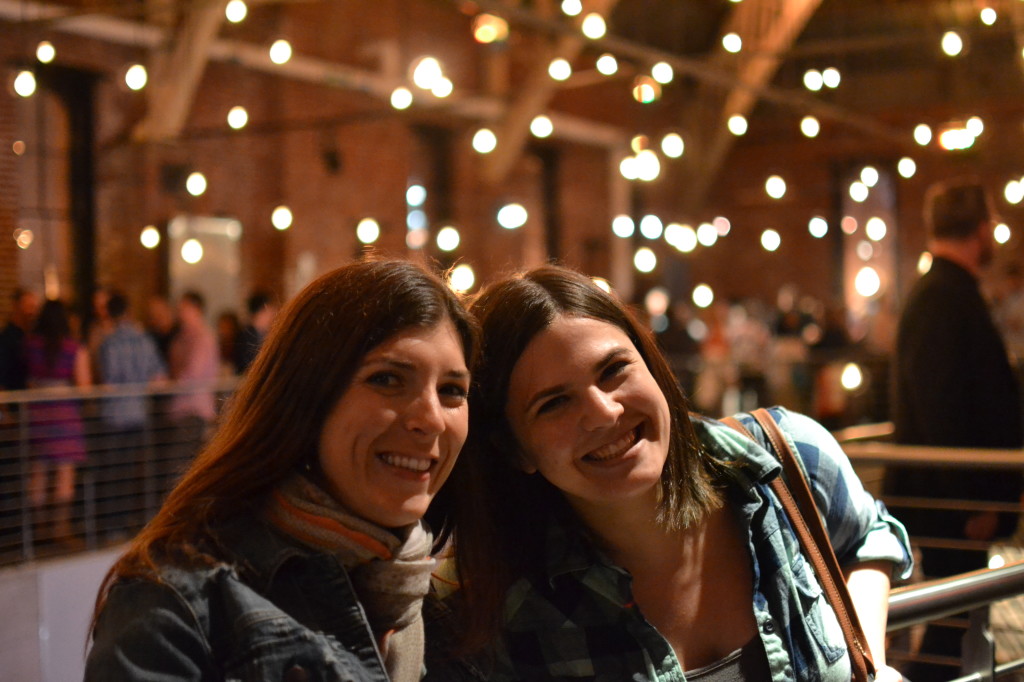 I absolutely loved the song list. My favorite was This is Not Love, sung by Mary Kate Morrissey who played Lizzie. She was phenomenal in this heart-wrenching, beautiful solo. I couldn’t find a copy from the actual musical but here is a great version from New Voices.

Despite the dark and sometimes depressing content of the story that made you root for Lizzie, the script was surprisingly witty and enjoyable. In particular Carrie Cimma who played the Bordens’ maid Bridget, was really great with her dry humor. She has played this role in several productions of the show, including one with Storm Large, so she’s clearly got the part down. 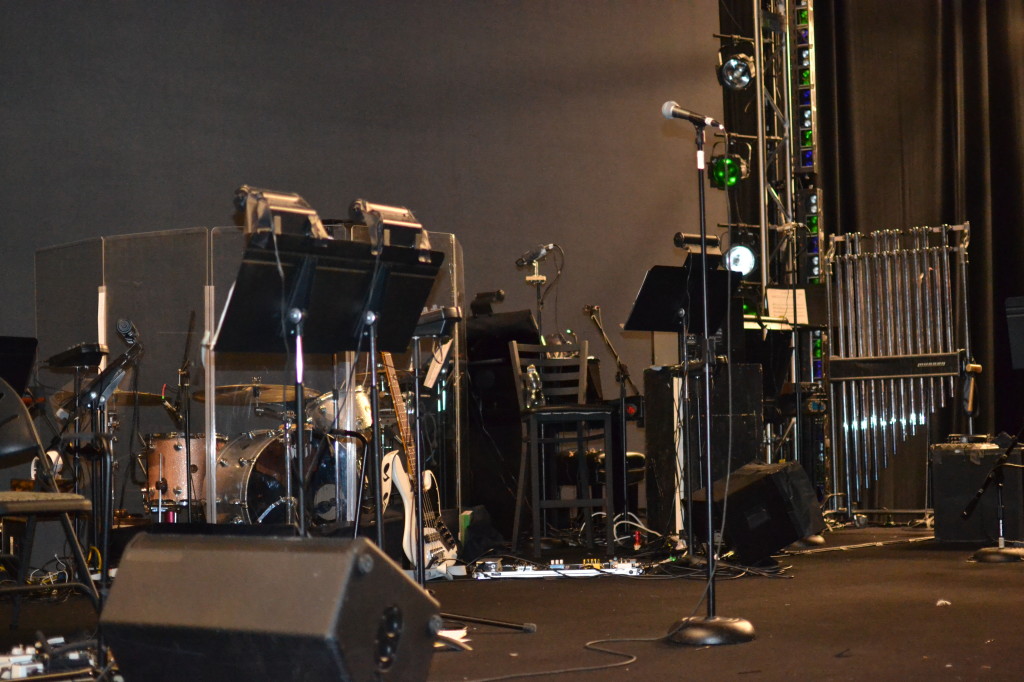 The rock band’s set up

The creator of LIZZIE said he got inspiration for the music from female rockers Heart and Patti Smith, which is evident in “What the F*ck Now, Lizzie?!” Sung by Lizzie’s sister Emma, who was played by Leslie McDonel, this song was a fun ride of head-banging, rock screaming and clever lyrics. (Again, I couldn’t find a video from PCS but to give you an idea, you can watch this version from Playhouse Square Production. Just so you aren’t too curious, the costumes in the PCS performance unlike this one are dresses from the 1890s.)

The second act, which covered the post-murder troubles for the Borden sisters and Lizzie’s trial, had another beautiful song, Questions Questions. Kacie Sheik, who was Lizzie’s friend, Alice Russell, and the rest of the cast in that song were really fantastic. 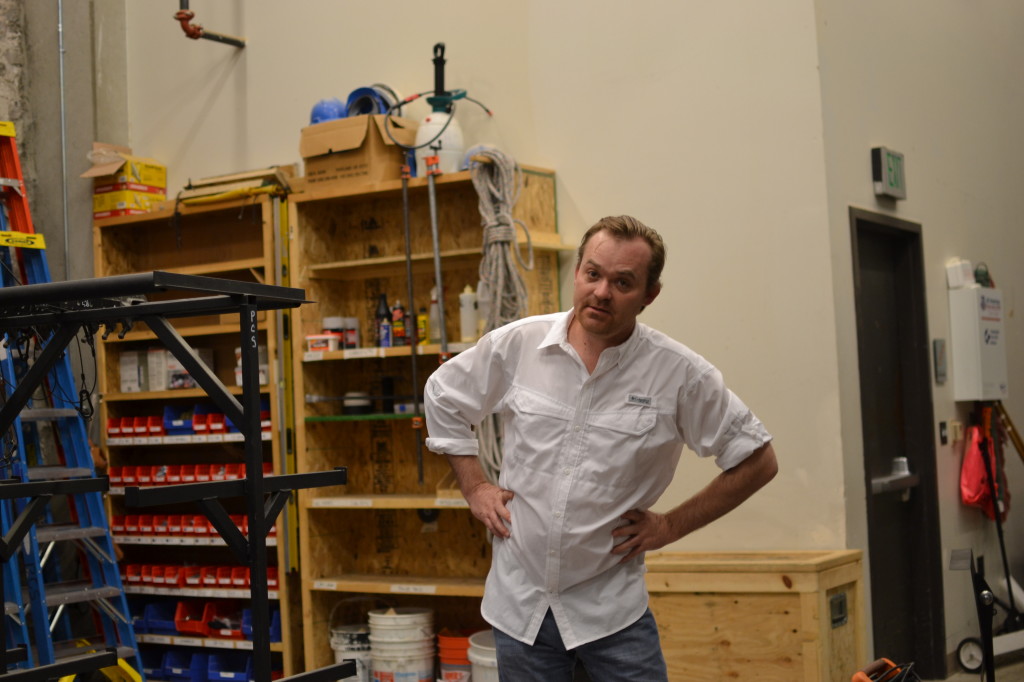 We were lucky enough to get a backstage tour after the show. 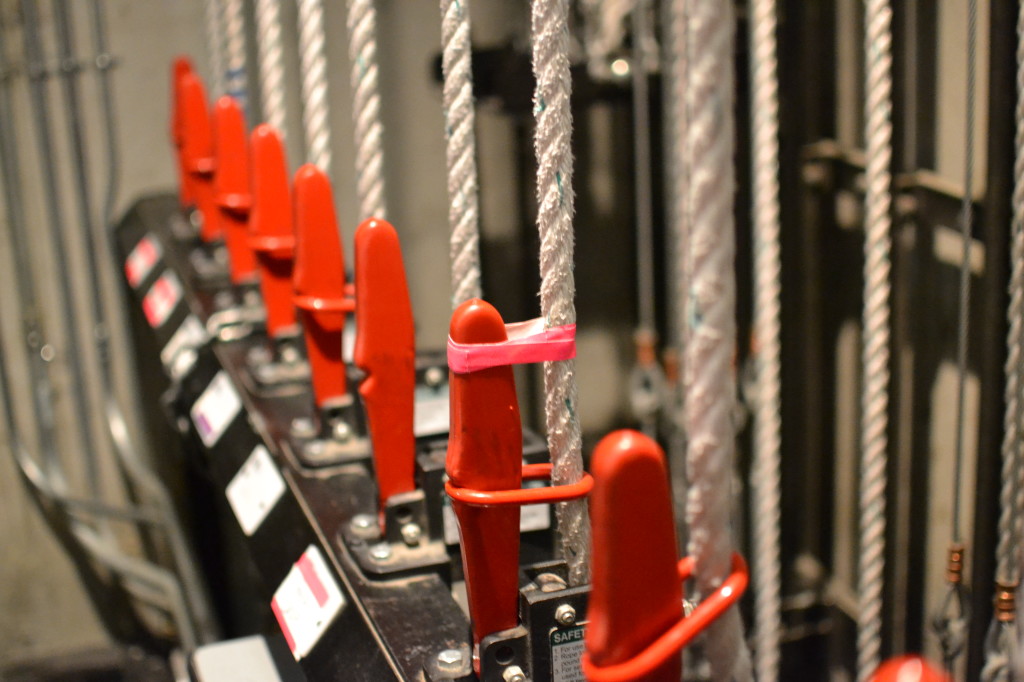 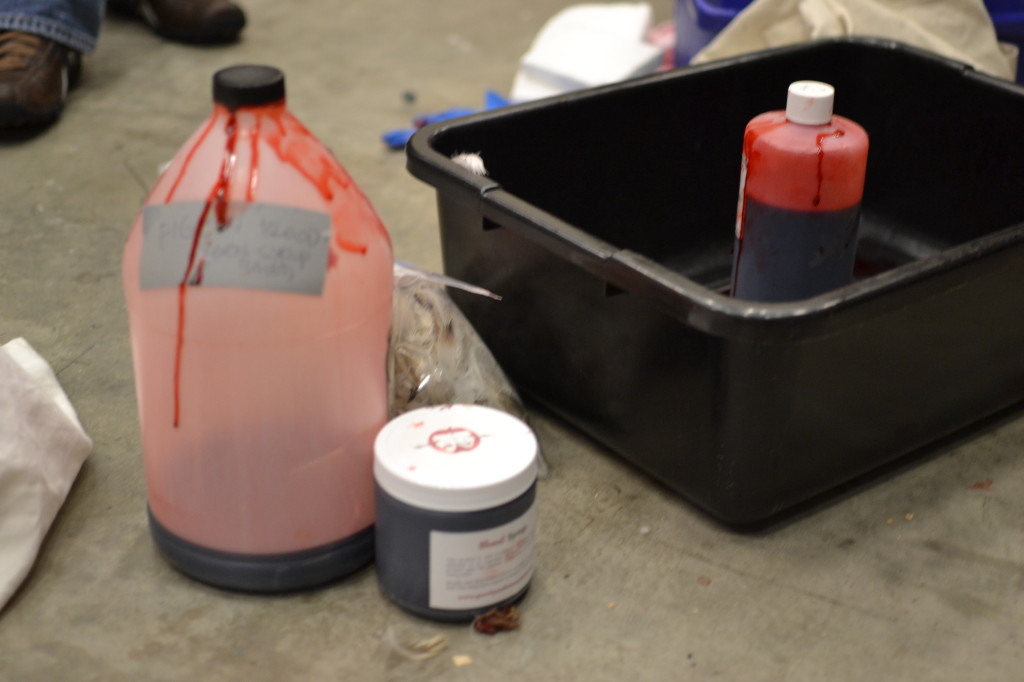 Lots of “blood” was used in the making of LIZZIE. 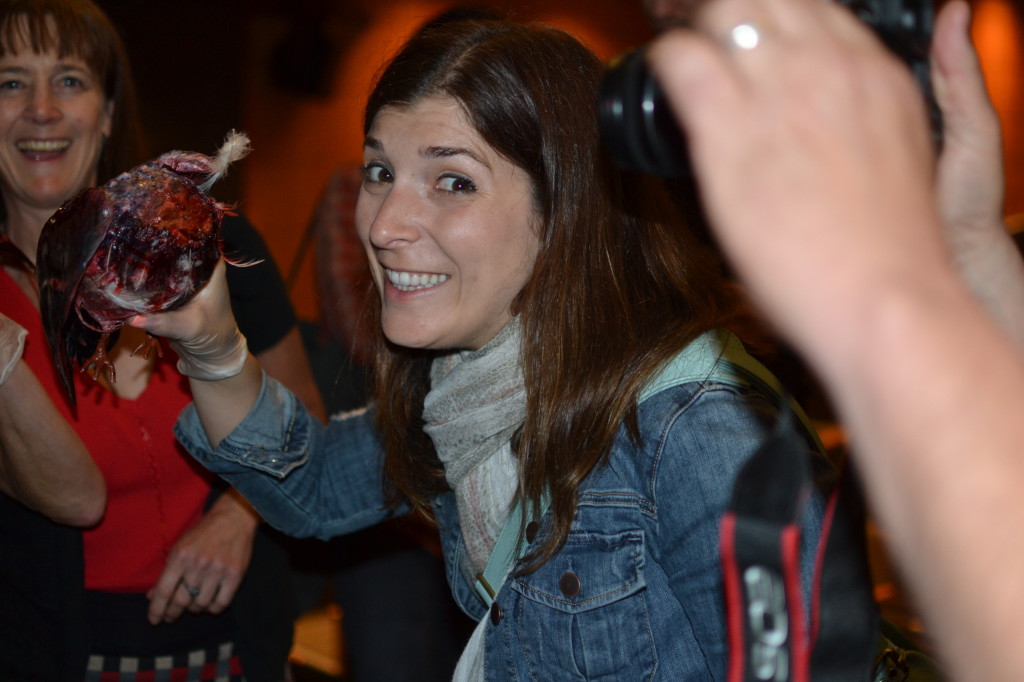 I got the luxury of holding of Lizzie’s beheaded pigeons.

I was impressed by how well done the show was, especially as we were there on opening night. The cast was extremely talented and gave a lot of heart to their performances.

My only criticism of the show was that choreography was sometimes a little awkward and forced when one girl was singing and another was still on stage. I also can’t decide how I felt about the microphone choices. The cast used both stick mics and the over the hair mics, which I found to be a little distracting. However that did add to the “rock band” imagery of the show, so I do at least appreciate the sentiment. 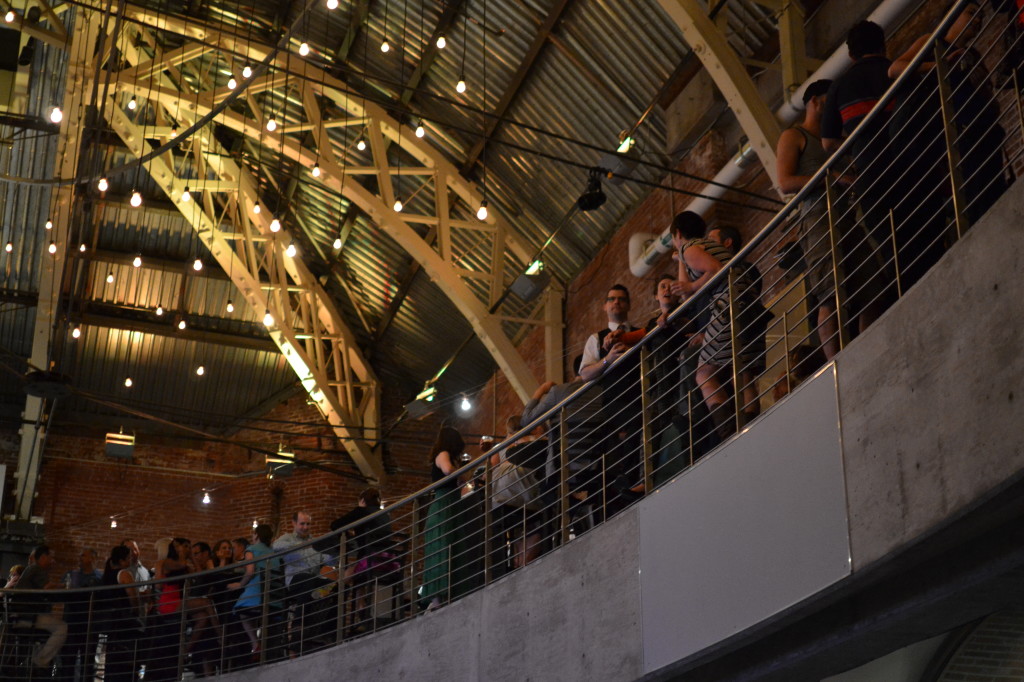 Even with the dark plot line, the show was a blast and left me smiling and humming the music as I left the theater. I definitely recommend going to see it before it closes. You might get some weird looks when you start singing “Forty Whacks” in the office when it is still stuck in your head a few days later. But then you can also provide your coworkers a history lesson of the crazy Borden family.

Here are some details on the show. Be sure to visit the PCS website for the full schedule and to purchase tickets.

Thank you to Portland Center Stage for providing me an opportunity to come to the show! And thank you to my wonderful friend Rachel for setting up such a fun night.