Last week I was graciously invited to a dinner at Cafe Castagna. Not only was I excited to catch up with my blogger companions for the night, Michelle of Hummingbird High, Annie of Serious Crust, and Beth of Talk Eat Drink Portland and meet Irene of Watershed Communications, but I was also eager to check out the Café’s new menu items which I had recently read about. 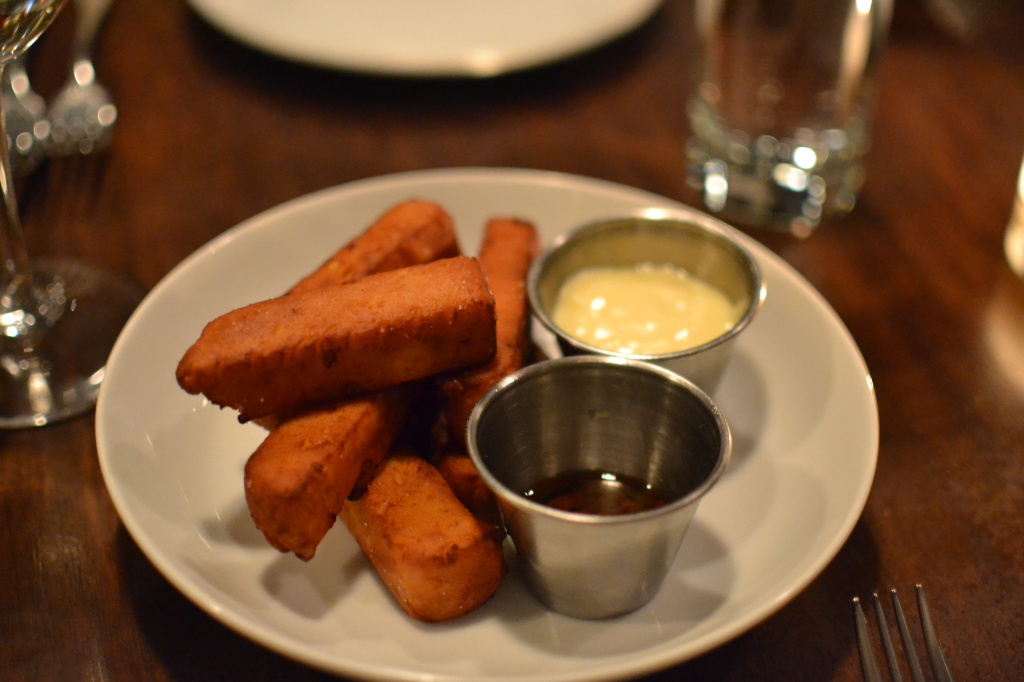 Their new chef, Wesley Johnson, who joined the SE restaurant this past summer, has done a full menu revamp. Based on his experience working at places like Philadelphia’s Zahav and East Burnside’s Levant and having lived in Israel, he has a fondness for and expertise in cooking Middle Eastern cuisine. Before Chef Wesley came on board, the more-casual sister restaurant to Castagna featured a menu of American, NW Cuisine items like pastas and pizzas. While some of those favorites remain like their Baked Penne with gruyere, leeks and saffron and their well-love hamburger, there is new life to the menu with a focus on shared plates. 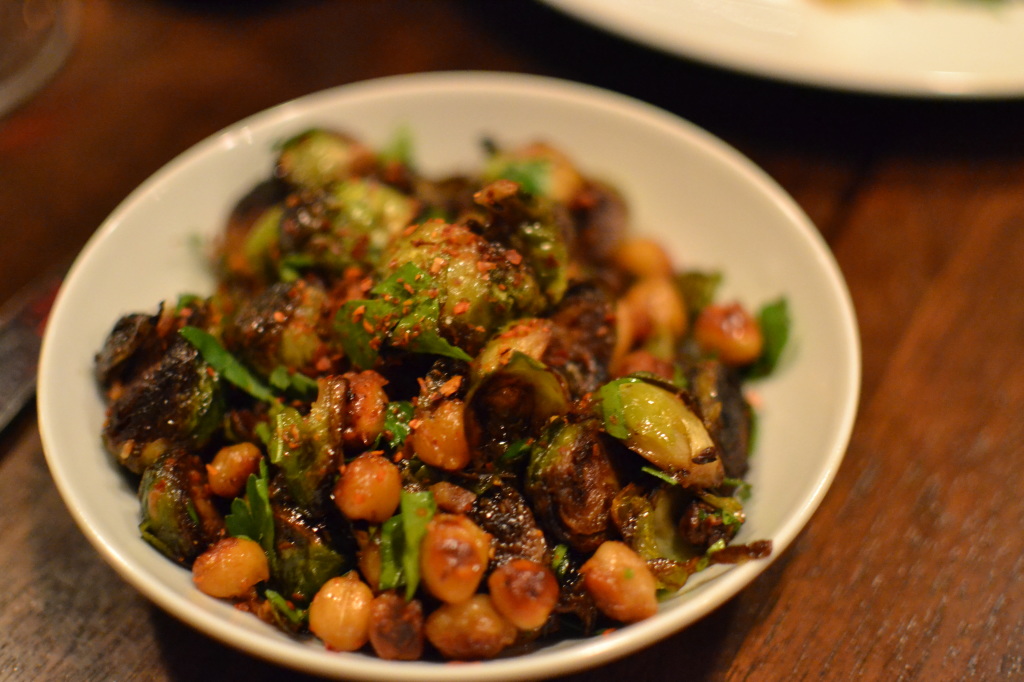 Chef Wesley told us a great story of traveling through Israel where they would consistently fill the entire table with plate after plate of food. It did not matter how many people there were or how hungry you were. He mentioned one meal where he sat alone at a table for 6 and it was still covered end to end. These dishes were not even the main course, but rather starters, salads or extras.

That overabundance is not taken to the same extreme at Cafe Castagna (though it was for our dinner!) but the same idea of lots of shared plates, starters, sides and family-style entrees persists. 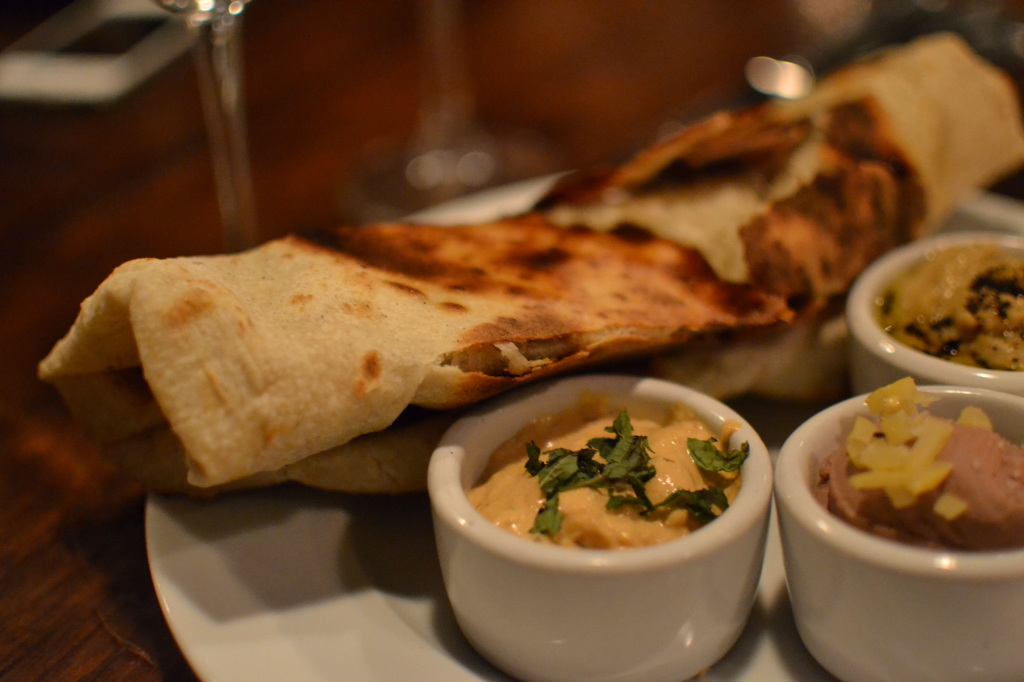 We were lucky enough to sample a huge array of the menu. First came the starters of insanely good fried panissa with aioli, pickled vegetables, and addicting flatbread that was still warm from the oven, served with chicken liver mousse, a spicy harissa and labneh, and Turkish hummus.

Then came the shared plates of charred beets tossed with tahini and sherry vinegar. Oven roasted carrots topped with zhoug (Middle Eastern hot chile sauce) and feta cheese – those were melt in your mouth good, and that is coming from someone who really doesn’t like cooked carrots. The roasted brussel sprouts with crispy chickpeas, black olive and Aleppo chile were spicy and fabulous. 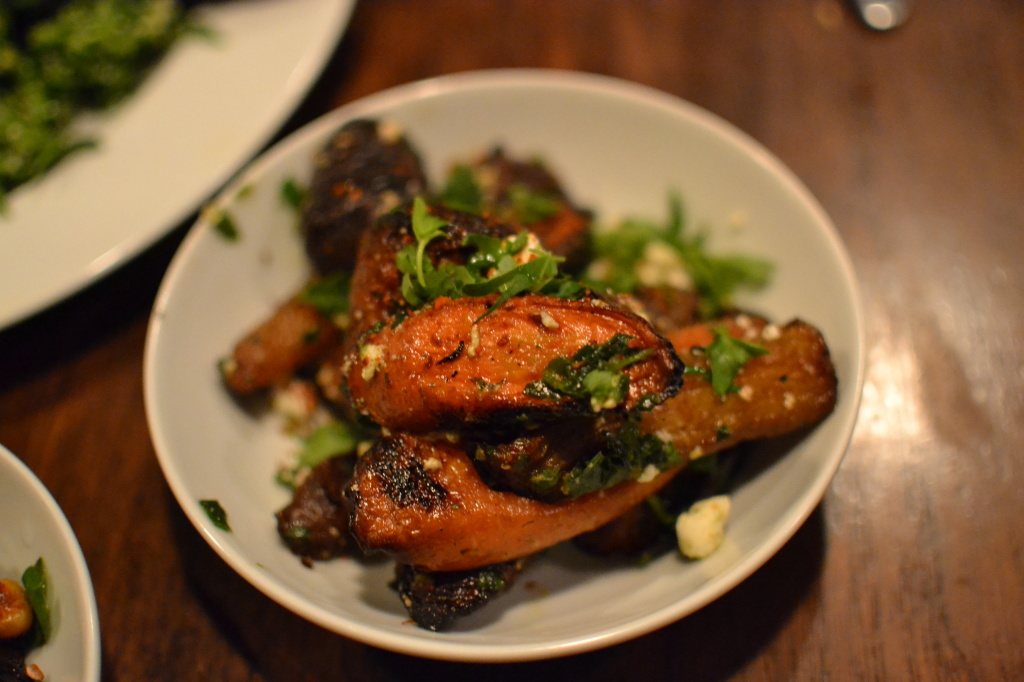 Next up, as a throwback to some of the Cafe’s previous menu items, we were served incredible agnolotti. The light ravioli-like pasta was stuffed with celery root and parmesan, then tossed in a light buttery sauce and black trumpet mushrooms. 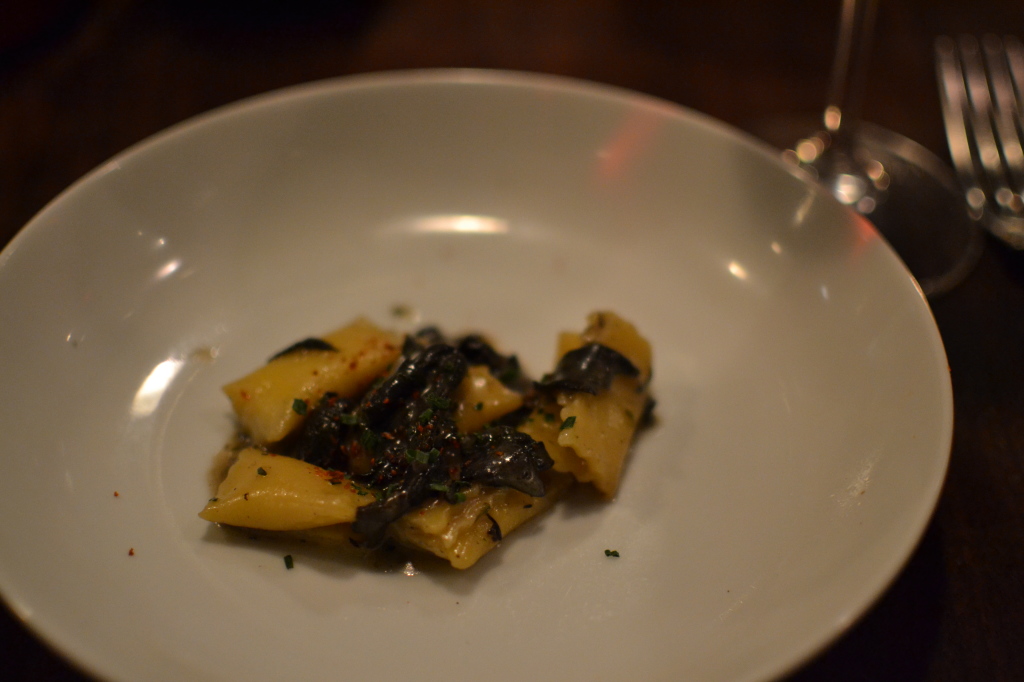 The big showstopper was the cipaille (pronounced sea-pie). Somewhat similar to a pot pie, braised hen, pork and even a veal marrow bone all covered in puff pastry and set in a large ceramic dish. Though fun to look at, it was hard to eat with the bones and giant pieces of potato. 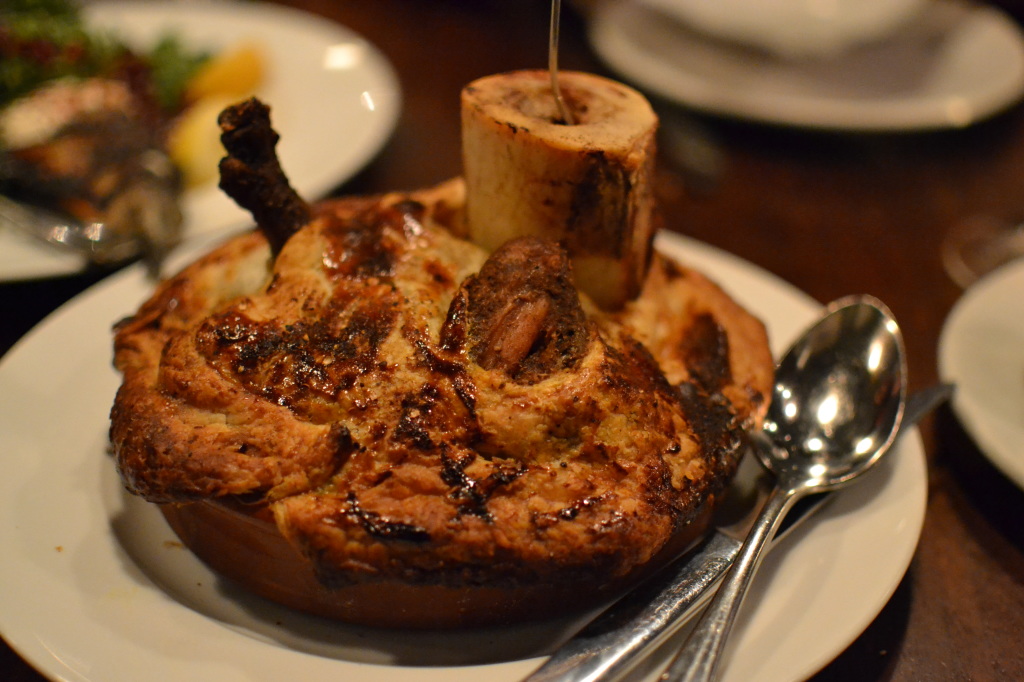 As if that was not enough, more dishes kept appearing including lamb meatballs and whole grilled trout. I wasn’t as enthusiastic about either of those dishes, especially compared to the other more flavorful dishes. Fried rabbit and an orange-grapefruit salad also appeared at one point amongst all the other food. 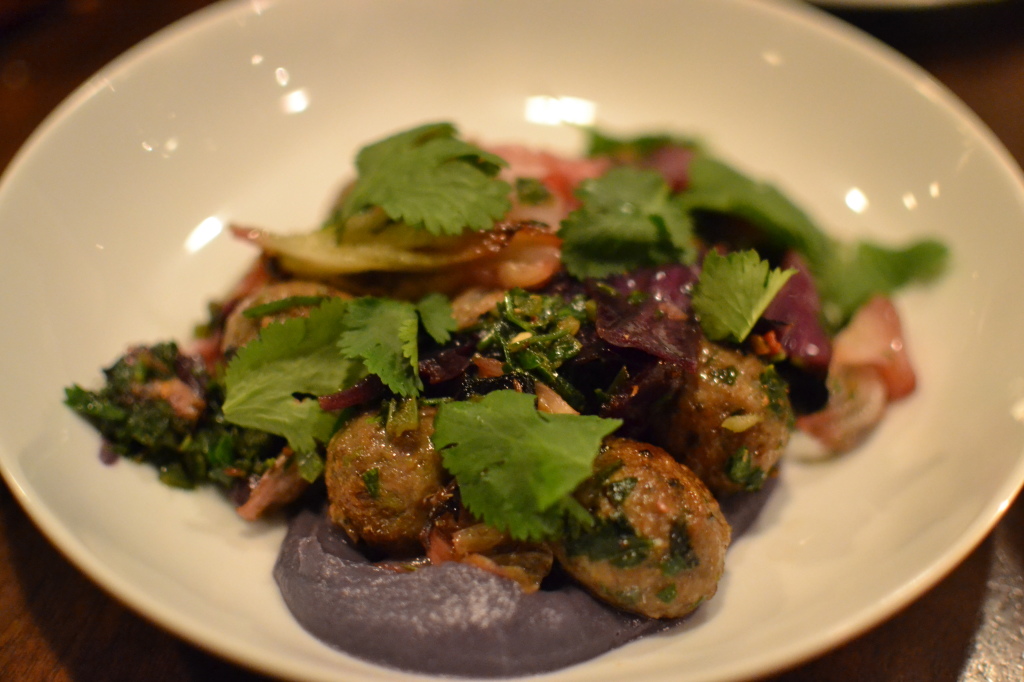 One of the last entrees we were served was the whole braised lamb neck. I’m not really a lamb eater (I sometimes refer to myself as a cute-tarian, meaning I don’t like to eat cute animals, so lamb usually falls into that category) but for events like this, I make an exception and generally try anything that I’m given. Confession time: I’m glad I broke my cute-tarian rule. This was so phenomenally good. The meat was tender and just fell off the bone. I loved it with the chickpeas and espellette pepper sauce. Super sadly, this will not be on the menu for much longer due to supplier limitations. So go in and get it soon!! 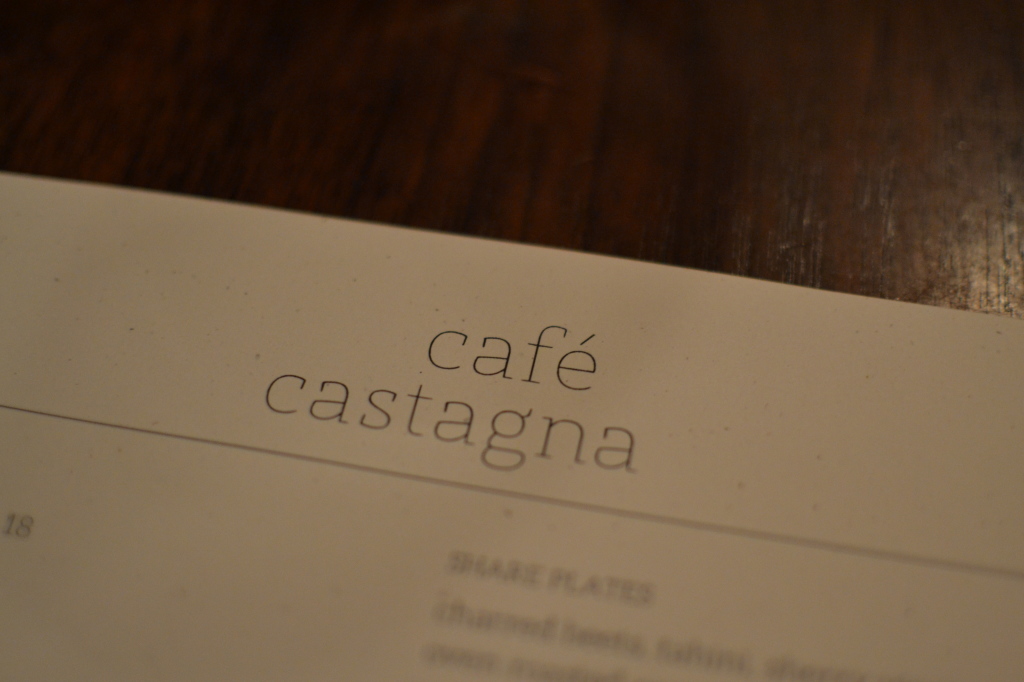 It is a toss-up on my favorite dishes of the night between fried panissa, the braised lamb and the agnolotti. Though we had so much food that I nearly forgot all of what we ate, including that pasta. While sneaking a peak at my Instagram during dessert, I saw Annie posted a photo of the pasta and seriously exclaimed “I almost forgot about that! That was so good!” We had a lot to eat…

Oh wait, and now I almost forgot about dessert! Silly me! 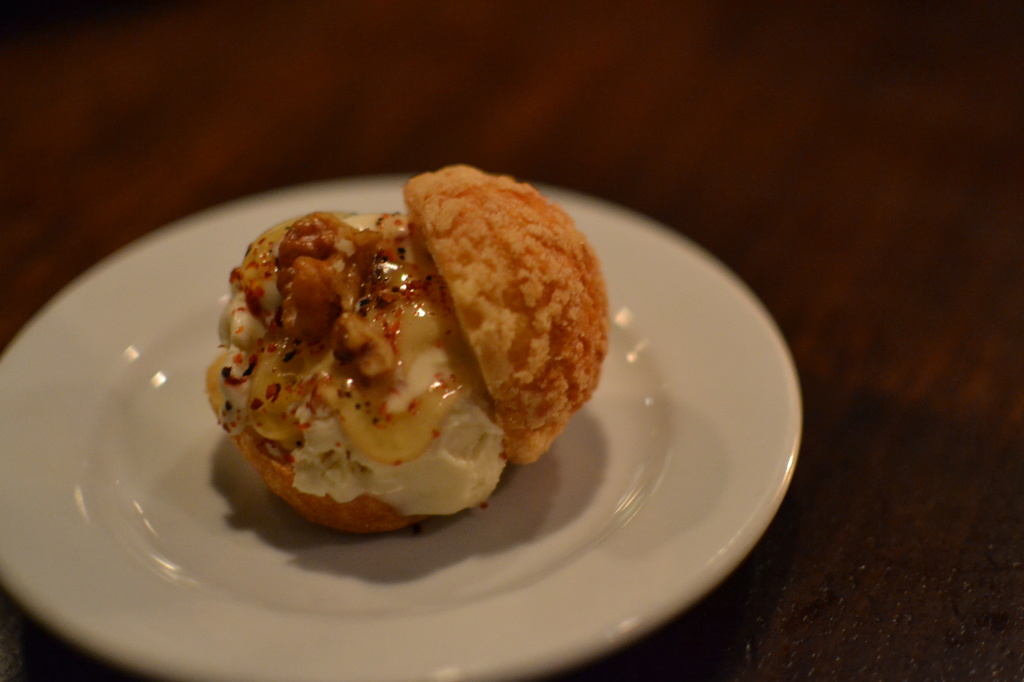 A profiterole with helva ice cream, honey and Aleppo pepper flakes. Seriously, so amazing. Helva is a common Middle Eastern dense candy, typically made from flour and/or nuts like pine nuts. Somehow they turned it into this mildly sweet, creamy ice cream. The pastry turning this into a delightful ice cream sandwich was light and fluffy. My trip to Asia must have worn off on me because the slight kick from the pepper flakes was a great addition. It was the perfect ending to such a rich meal. 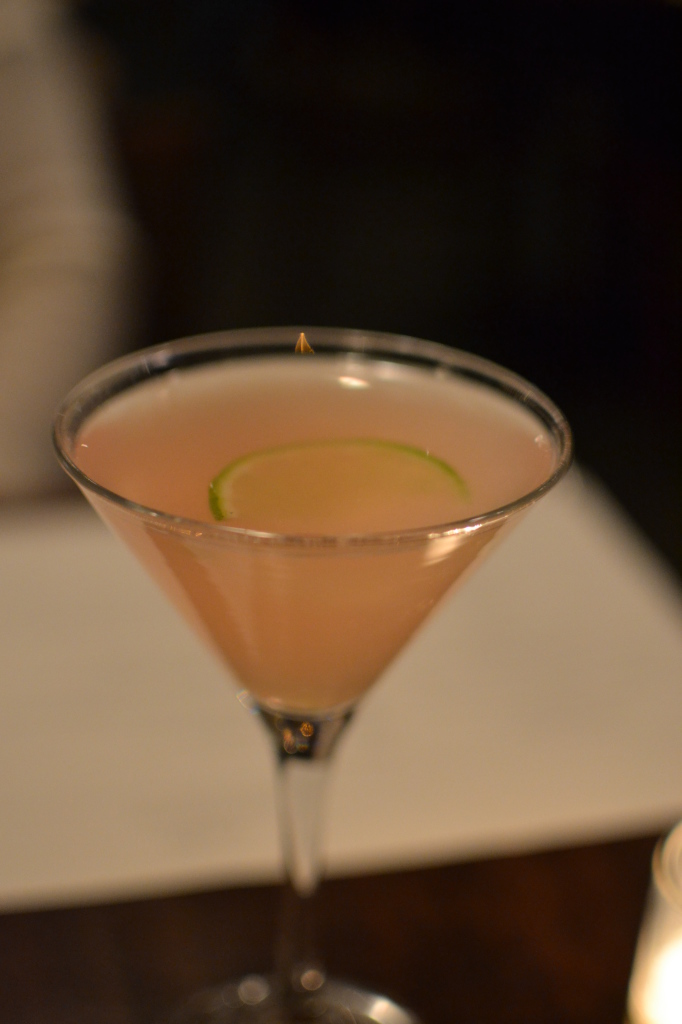 Obviously we were served A LOT of food, just like Chef’s stories from Israel. If you want a similar experience, you can select the “Let the Chef Decide” option. After a long workweek where you just don’t want to make more decisions, or more realistically you just can’t narrow your options, the whole table can go in on this multi-course offering. There are two options for either $30 or $40 per person. Both come with the same amount of food, but the more expensive option will include higher priced ingredients. I have no doubt both will come with an incredible array of dishes. 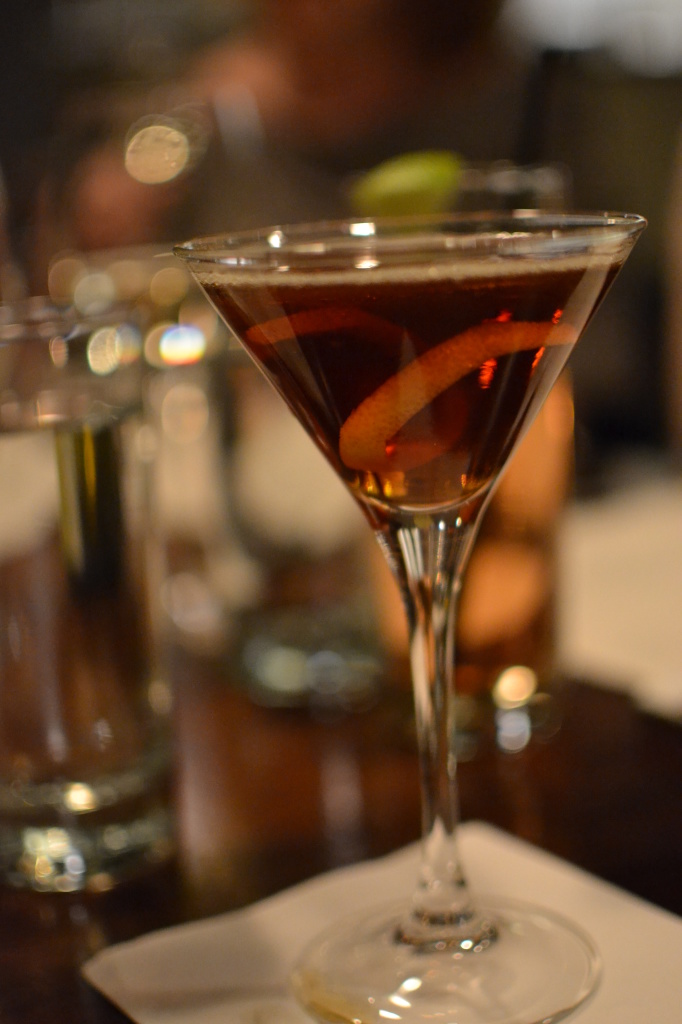 On the drink side of things, Café Castagna is also changing up their bar program. They have beautiful, creative cocktails like the Hemmingway Daiquiri made with white rum, maraschino, grapefruit and lime. They also have a unique twist to the wine list by offering wines by the bottle, all for $45 (if you get the Let the Chef Decide, you get $5 off a bottle!). Quite a few of the wines are uncommon or hard to find, with the vision that you can be more adventurous with your selection because price is not a factor. While I like the idea, $40 admittedly is often a higher price point than I would usually spend on a bottle at dinner. But I will say the wines we enjoyed that night were excellent! 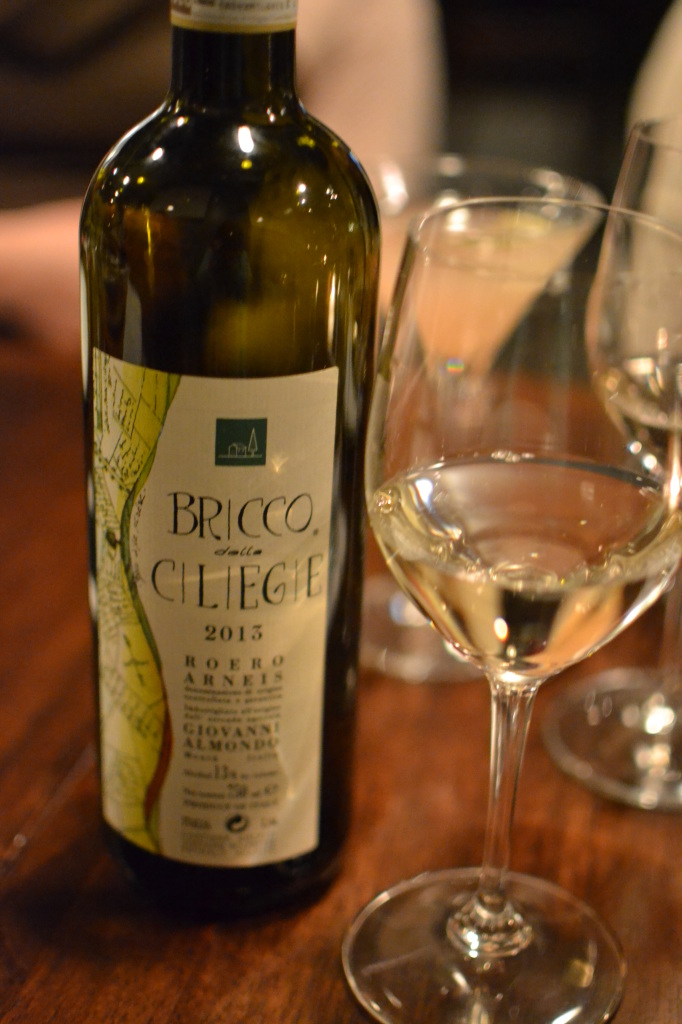 On the other side of the wall is Castagna, which is completely unlike other restaurants in Portland. It is one of the few places for the classic date-night with white linens, superb service, and exquisite food. Chef Justin Woodward does an incredible job making creative, modern cuisine. 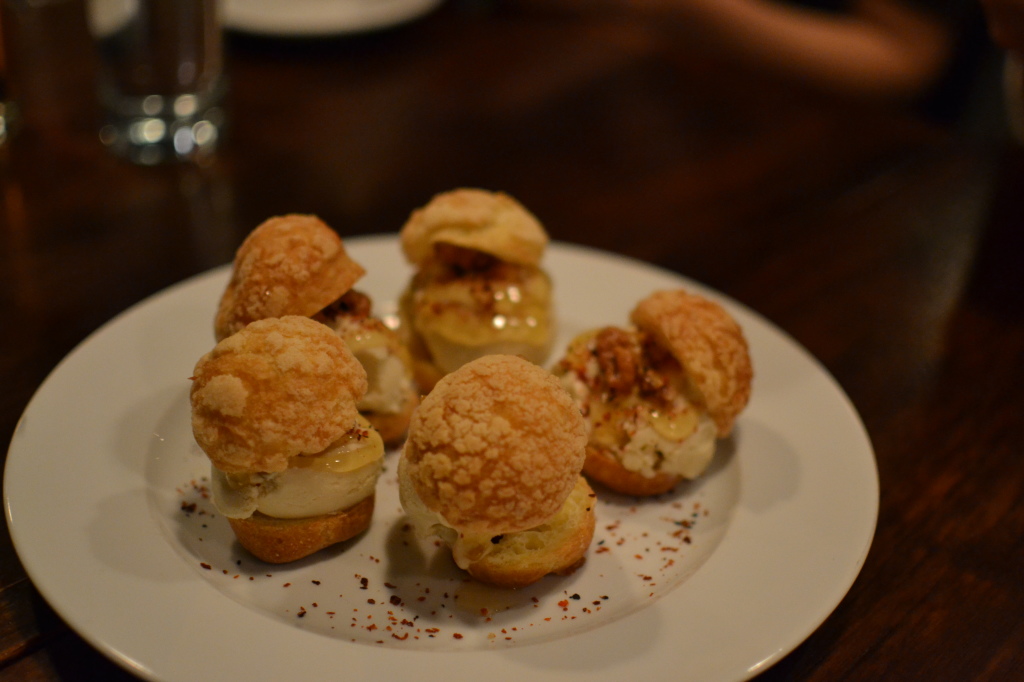 He also is known for his desserts and has perhaps one of the best ideas in the city – a dessert tasting menu! For just $25, you get four courses of gorgeous and decadent sweets (for $12 more, you can also get a wine pairing!). I sadly confess I have not been to it yet. I vowed during this dinner that I would make it happen in the next few months. Trust me, I will report back soon! {You can get easy reservations for the dessert tasting with OpenTable!}

Thank you to Chef Wesley and the rest of the staff at Café Castagna for a fantastic meal and to Watershed for the invite. And of course my blogger friends for a fun evening!